I gave it a minute and it changed everything 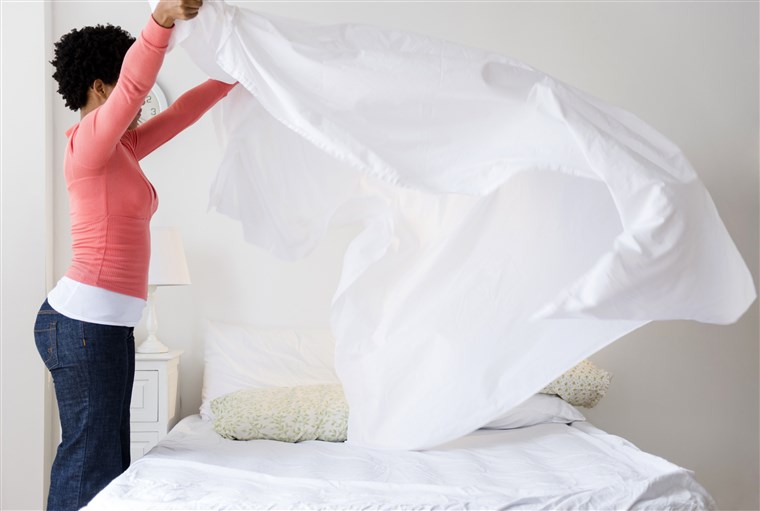 I tried the ‘If it only takes a minute, do it now’ cleaning hack. Here’s what happened.

It was one of those ‘tricks’ or ‘hacks’ that journalists like me like to put in stories. The tip in a round-up I came across one night read: If it only takes a minute, do it now.

The simplicity and do-ability of the idea made me sit straight up. Like just about everyone, I feel overwhelmed more days than not. I never seem to have time to tend to all the moving pieces in life. Emails go unanswered, mail goes unopened, laundry goes undone. But I have a minute. Here and there, whether it’s while I let the dogs outside, or while I wait for coffee, I have a minute.

So I started using those minutes. Swapping out from the daytime wear I make myself put on even though I work from home into cozy after-work wear, my inclination is to drop the clothes I plan to re-wear (most of them, because: laundry) on the chair. It only takes a minute, came the thought the next time I started to drop the clothes. So I counted as I hung them up. Thirty-seven seconds! Why, why did I find it so hard when it took so little time? Suddenly, everywhere I looked were things I could do in a minute. Answer that text message from last week, schedule the appointment I’m overdue on, make the bed.

It was intoxicating. I was getting things done, making plans to see people instead of leaving it at exchanging ‘we should get togethers,’ and because things didn’t pile up, keeping the overwhelming operations of living in a big, old Victorian running more smoothly (in cooperation with my husband).

But why? How could this one tiny thing make such a difference? And could this momentum be built on somehow?

For answers I talked with Louisville-based licensed clinical psychologist Kevin Chapman, PhD, who specializes in anxiety and related disorders.

What’s in it for me?

First, we have to understand why we don’t just do these things, these minutia of daily life, to begin with. That mail’s not going to put itself away. So why not do it? “The easiest explanation is it’s a perceived lack of reward,” Chapman said. “There’s no immediate gratification involved in these mundane tasks.”

That’s the aha moment. It’s not why don’t we do these things; it’s why would we do them? Except, actually, that’s not it.

Ultimately, what we’re really talking about, Chapman said, is emotional avoidance — and procrastination. And the driving force behind procrastination most of the time “is trying to regulate or manage anxiety in a way that provides temporary relief,” Chapman said. These tasks feel overwhelming so we avoid them, “but the irony is it backfires and makes us feel more of the emotion we’re trying to push away.”

“The more mail I don’t open the more mail I have and more anxious I am,” he said, and long term these emotions are intensified, and we end up in a vicious cycle.

So when we actually do these impossible tasks, it’s exhilarating. Maybe it’s just hanging up my clothes, but in that moment it’s like I’ve climbed Everest.

It’s about tapping into a feeling

Here’s what’s happening there — on the surface, anyway: “I have this unrealistic expectation that it will take forever to hang up my shirt … my body will respond to what I tell it,” Chapman said. “If I say it’s insurmountable and force myself to do it I’m violating my expectations. [Then] it’s like, ‘wow I did it!’ and have this sense of accomplishment.”

Go deeper though, and it’s about confronting emotions we’re trying to push away, Chapman said. “People generally tend to avoid strong emotion. Even if it seems trivial like putting clothes away, when I confront something that triggers strong emotion via altering my behavior, that emotion runs its natural course and regulates itself. I feel better naturally because I responded to what the emotion was telling me to do.”

So, in parallel to my original question of why don’t we just do the blasted things, “It’s so incredibly silly of us to not confront things,” Chapman said, given that we will feel so much better. But, “we don’t. We get stuck … the emotion gets stronger over time and we avoid more.”

Here’s what’s really cool. “If I can recognize that despite how I feel, if I [do this thing] I am guaranteed, guaranteed to feel better, guaranteed,” Chapman said, “that should propel almost anyone to confront a situation.”

But there’s more. “The million dollar question to ask,” after making yourself do that dreaded task, he said, “is ‘what did I learn? I learned it only took 30 seconds, and it wasn’t that bad.’”

“The million dollar question to ask is ‘what did I learn? I learned it only took 30 seconds, and it wasn’t that bad.”

From there, the icing on the cake is that if someone wants to get in this new habit, “their brain is going to form a new association the more they do it,” Chapman said, “and therefore they’ll stop thinking of that task in the same way.” Yep, one minute at a time you can basically retrain your brain to stop thinking that opening the mail is a giant horrible chore. How long does that take?

It depends, of course, but “even for severe pathology we’re talking three to five trials” to have an impact, Chapman said. The key is to be committed, and (if possible) to repeat the behavior in different contexts like time of day or location. But seriously, this time next week I can be a mail-opening machine? I’m sold. Be right back. I’m going to go get the mail.